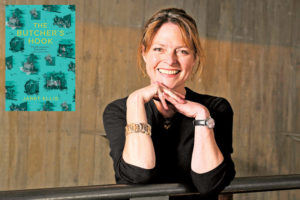 Blue Peter Janet Ellis: Help! My best friend’s dating a younger man.  Novelist Janet Ellis, 61, advises readers on their problems.  A reader wants advice about their early 50s friend who is dating a 34 year oldJanet urges the reader to only share her views if the friends asks for an opinion Novelist, grandmother of four and ex-Blue Peter presenter, Janet Ellis, 61, answers your questions …Q: My best friend has just started dating a man much younger than she is and I’m struggling to adjust. We are both in our early 50s and her first marriage ended a few years ago. So when she announced that she was seeing someone new, I was pleased.However, she recently hosted a dinner party and invited her new boyfriend.While she warned me there was a slight age-gap, I never expected a 34-year-old to turn up.

An anonymous reader asked Janet Ellis for advice about the relationship of their early 50s friend who is dating a 34 year old I cannot describe the shock! He was perfectly nice, but it was completely surreal. Although she’s never had children, he isn’t much older than my son, who is at a totally different stage in life to us.We haven’t spoken much since and I want to be supportive, but I just don’t know what to say . . .A: There is a fine line in friendship between total honesty and kindness. The first quality protects and supports when the going gets really rough, but it’s also essential to adjust the truth sometimes.
We say it’s a great dress if we can tell our friend feels good in it — why would we upset her by pointing out the flaws? We reassure her she wasn’t too embarrassing after one too many glasses of prosecco because we all had a good time and her hangover’s punishment enough. This situation, though, makes you question how much honesty is too much.Meeting your friend’s new partner is always a big event. If he’s of a similar age to you both, you may marvel at how she can tolerate his golfing anecdotes or eating habits, but it’s usually on a pretty equal footing and you can be happy your friend’s sparkling again. Janet advised the reader to only comment on their friends relationship if asked directly +2Janet advised the reader to only comment on their friends relationship if asked directlyWhile a 34-year-old is hardly a child, as you rightly say he’s at a different point in his life and has a very different set of cultural references.I wonder if you’d feel the same if he were much older? The fact this chap’s about the same age as your son makes it doubly unsettling — you’re only too aware of how young he is and, however unlikely, there’s a suspicion she may take a fancy to another young man you know.There are two possibilities for their relationship — one is that she’s enjoying a slightly irresponsible foray back into the world of dating after a few years in the wilderness. The other is that these two are soulmates.Whatever the outcome, they want to introduce each other to the people in their lives who matter. She’ll be sad you don’t feel able to share her happiness. I suggest you get in touch and remember the honesty/kindness ratio. You’re perfectly entitled to comment on the trivia of their relationship, but should only tell her how you feel if she asks.He may be negotiating the minefield of meeting her friends, but don’t forget she’s got to get to know his, too. She’ll certainly need your support then!

We use cookies to ensure that we give you the best experience on our website. If you continue to use this site we will assume that you are happy with it.Ok